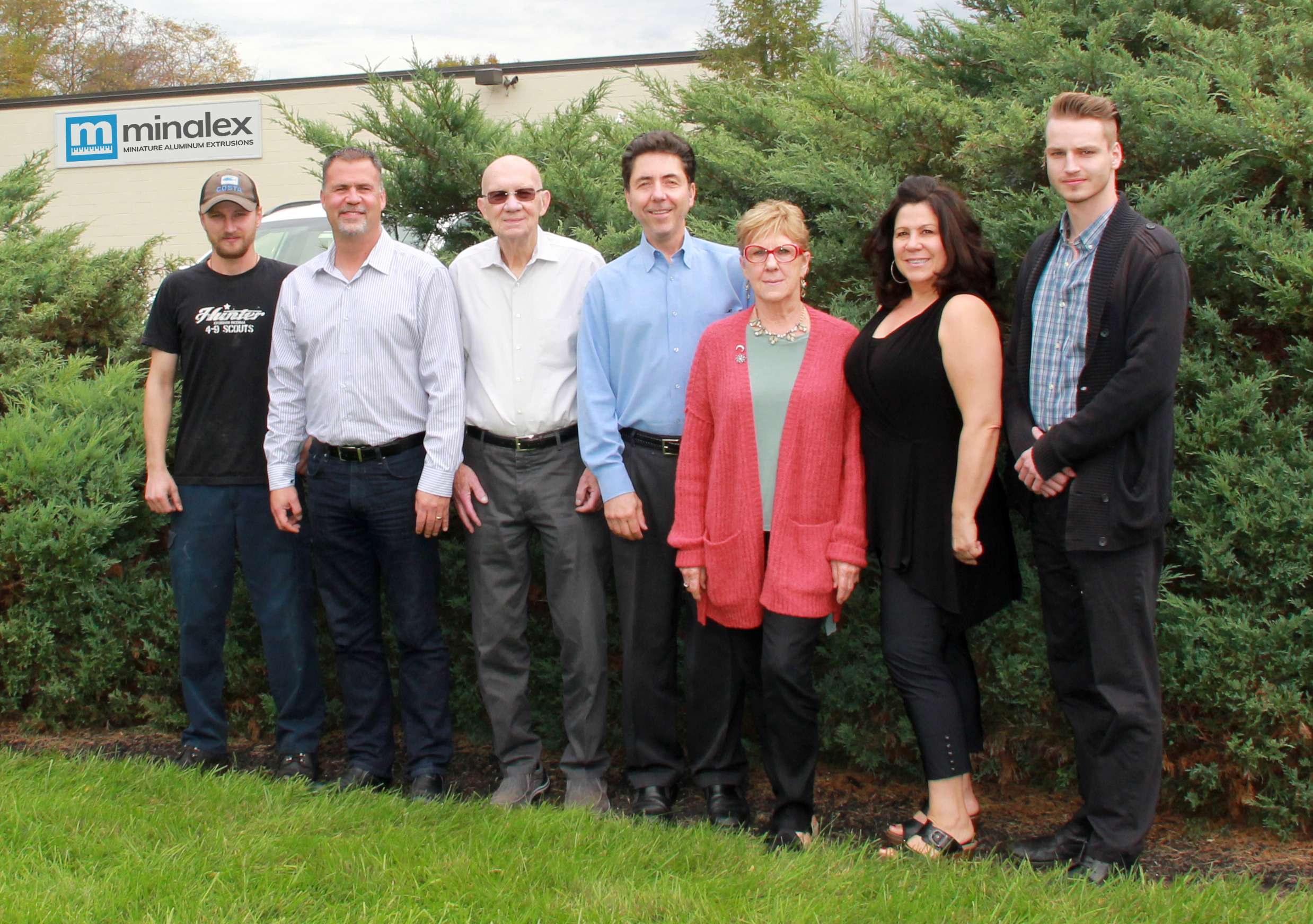 Measured traditionally, a half-century is the passing of chronological time. Another way to gauge it is by the value and longevity of the relationships formed and sustained during that time. In that regard, few corporations can confidently say their strength lies in generations of family who share the same vision: to ensure that relationships create a prosperous, secure business for both company and clients. This long-standing principle is one that has been unwaveringly embraced for more than 50 years by the family-owned and founded Minalex Corporation, who today continues to be at the forefront of high-quality, custom aluminum extrusions.

The company’s long-term customer relationships have been built on a solid family core, with a keen sense of trust, honesty and reliability. These values provide an important backdrop for the components that Minalex manufactures, many of which are extremely sophisticated and complex. Over time, modern extruded components for aerospace, medical devices, LED lighting, remodeling and the military have become increasingly demanding of precision tolerances that fit rigorous applications. Minalex has dependably met and exceeded these requirements at every turn.

What makes Minalex unique is not only the components it creates, but also the ways in which the family has played critical roles in the company’s overall success. Their diverse contributions at all levels are immediately evident by simply observing the titles held. From Founder, Jim, to sons Michael, as Director of Engineering Applications & Design, Chris, the company’s General Manager, and Vicki, Office Manager to third generation Rob and Joe, Quality Control Specialist and Inside Sales respectively, commitment to quality and the highest standards is “priority one.”

Jim Casey, Founder and CEO, has been the driving force behind Minalex since 1965. His wife Bobbi Casey also works in the business and has done so from the very beginning, when Jim also performed salesman and press operator duties. When their three children, sons Michael and Chris, and daughter Vicki, were young, they would often play on the office floor as their parents stayed up working late.

Throughout the years, Jim Casey’s immediate family has expanded their knowledge of the business and has been heavily involved in managing the company as a whole. Today, with the third family generation on the company roster, eight family members in total are involved in key functions of the company’s daily operations.

“It’s the camaraderie and the relationships that are most important. Strong relationships build strong businesses. We’re in a niche in the industry, and we know we can’t be all things to all people. What matters most is being the best at what we do: to excel and make meaningful contributions,” stated Jim Casey. “It’s all about open communication and empowering the team to make important decisions on their own.”

The strengths of every family member shine through in his or her respective positions within the organization.  Michael Casey, Head of Engineering and Design, recalls coming to the plant as a 7-year-old. He started working for Minalex as an inside salesperson in 1989, a role his father asked him to ‘try for six months.’ A career path that led to an engineering and design track soon followed. “Running a custom manufacturing facility means that we have to constantly make critical choices, and my father has empowered us all to step up and do what we think is right for the company, and best for our clients. He has always encouraged and supported us when it comes to independent decision-making,” commented Michael Casey.

Shortly after Michael joined the company, his younger brother Chris followed. Chris began his career at Minalex while in high school and joined the company’s management team after college. His first several years were spent modernizing Minalex’s technology infrastructure. Working with the input, experience and support of his father, mother and brother enabled Chris to accomplish this considerable undertaking. “The entire family wants the business to succeed. None of us ever feel entitled in the least,” General Manager Chris states. “We all recognized the hard work required to run a successful operation, and our parents always held us to a higher expectation.”

Sister Vicki joined the company in 1997 in an administrative role that has grown over time, from purchasing to quotes, invoicing, and accounts payable. Now Office Manager for Minalex, Vicki says that when you work with family, “it’s important to have a solid relationship with each of them; you see them every day. We have great relationships and always communicate. We resolve issues quickly and have never had a major conflict. Family aside, we all genuinely like each other.”

Rob Regan, Chris Casey’s son and Quality Control Specialist, started working in the family business during high school, and then spent the next five years on active duty in the military. Upon returning home from the Army, he called Grandfather Jim and rejoined the company in 2015. Since then, Rob has been trained to perform multiple operations throughout the plant; a path similar to the one his father followed.

“There’s so much history here. I’m always fascinated with how my grandfather started the company, and how we continue to maintain and build such long-standing relationships. I love that now I can contribute to our continued growth, and work to bring excellent components and products to the marketplace,” commented Rob.

More recently, as additional help was needed in the office, Joe, Chris Casey’s younger son, decided to join the family business, and today is a salesperson. The work ethic he has seen from his grandfather, and everyone in the family has made an immeasurable impact by setting an example and defining the pace. “With family, there are definitely higher expectations,” Joe says, “but it’s all for the good of the individual, and for the good of the company.”

To Minalex, giving back to the local community and family traditions are of equal importance. A long time supporter of the Pop Warner Falcons and Flemington Raritan Little League, they are also active in supporting the Hunterdon Drug Awareness program, and were recognized as a NJ Family Business of the Year.

Whether it’s the annual birthday celebrations in the office, or the combined effort to ensure that their manufacturing partnerships endure the test of time, the common underlying thread at Minalex is clear: it’s all about maintaining strong relationships that stand the test of time.