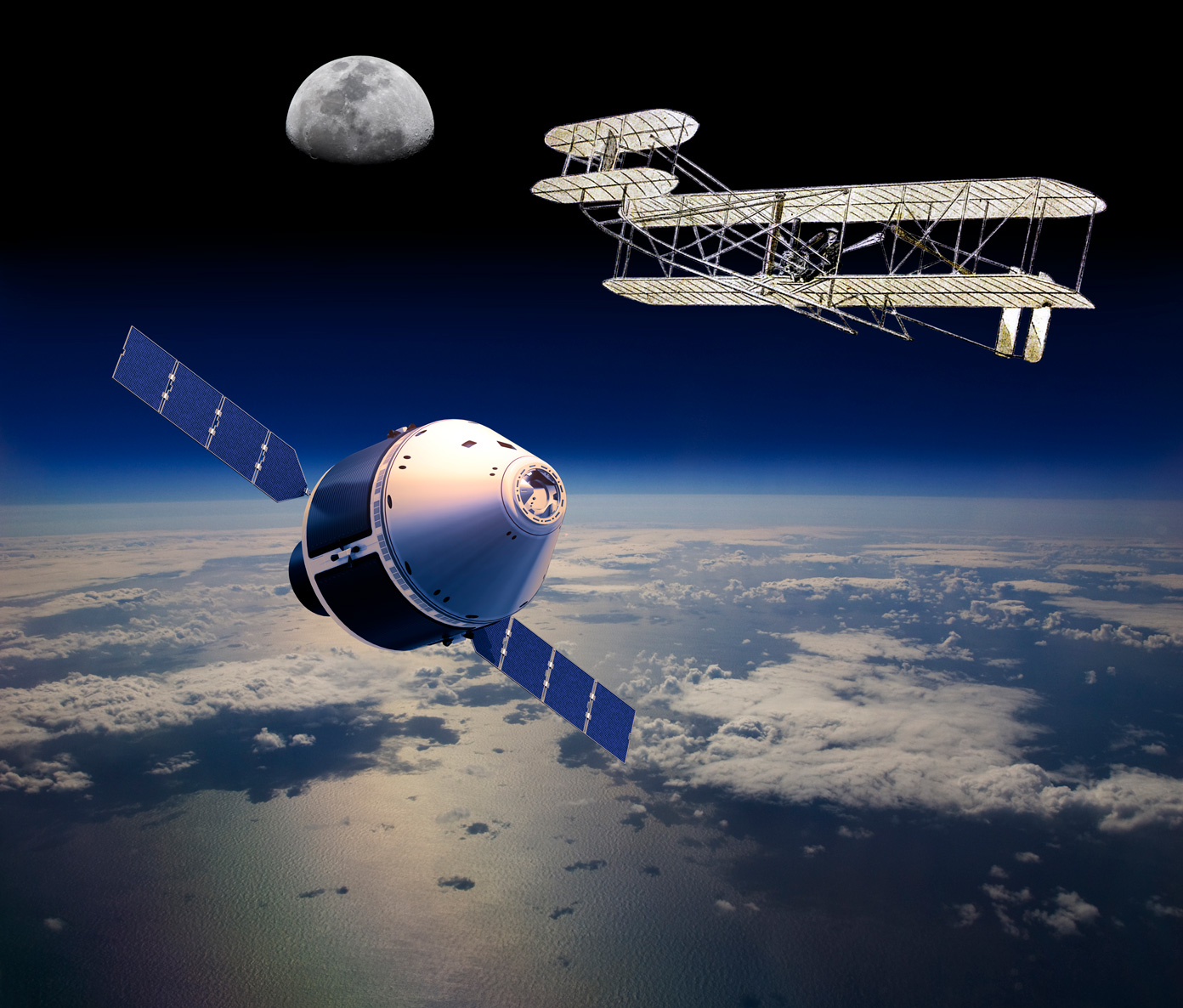 Perhaps the first person to truly appreciate and understand the full potential of aluminum in the aerospace industry was the great writer Jules Verne. Published in 1865, his novel Journey to the Moon included a detailed description of an aluminum rocket. In the intervening century and a half, the advancement of aircraft and aerospace technology can be directly tied to the advancement and production of aluminum and aluminum alloys. From the Wright brothers’ use of aluminum in their first biplane to NASA’s use of an aluminum alloy in the Orion spacecraft, lightweight aluminum has helped make it possible for mankind to fly both around the world and send spacecraft to probe the most distant reaches of space.

The date was December 17th, 1903. The place: outside of Kitty Hawk, an isolated village on North Carolina’s Outer Banks. The event: Orville and Wilbur Wright’s first successful flight in the history of a self-propelled, heavier-than-air aircraft. Orville piloted the gasoline-powered, propeller-driven biplane, which remained aloft for 12 seconds and covered 120 feet on its inaugural flight. By today’s standards, the duration, speed and distance were insignificant, but what made this occurrence so consequential was the leap forward it represented in the exploration of space, one that continues with no end in sight.

Somewhat underappreciated in the enormity of the achievement was the role that aluminum played in the flight’s successful, albeit brief, performance. In fact, the Wright Flyer, in which the Wright Brothers achieved the first powered flight, utilized a cast aluminum engine block to minimize weight.

Today, high strength with light weight, minimal maintenance, the lack of brittleness at very low temperatures, and the ability to engineer a broad range of functionality into components, continues to make aluminum extrusions a major element of military, aircraft and aerospace solutions.

WHAT MAKES ALUMINUM “RIGHT FOR FLIGHT”

Though lightweight, commercially pure aluminum has a tensile strength of approximately 13,000 psi. Cold working the metal approximately doubles its strength. Aluminum is sometimes alloyed with elements such as manganese, silicon, copper, magnesium, or zinc to further increase strength. Some alloys are further strengthened and hardened by heat treatments. At subzero temperatures, aluminum by itself is stronger than at room temperature and is no less ductile, while some aluminum alloys retain significant strength up to 500°F.

Besides a high strength-to-weight ratio and good formability, aluminum is highly desirable because it also has its own anticorrosion mechanism. When exposed to air, aluminum forms a hard, microscopic oxide coating, sealing the metal from the environment. The tight chemical oxide bond is the reason aluminum is not found in nature; it exists only as a compound.

These properties enable miniature aluminum extrusion manufacturers like Minalex to create exceptionally strong and precise extrusions that retain their integrity throughout much of their usable life.

Check out our selection of high precision standard extrusions or contact us below about custom aluminum extrusions made to your exact specifications.