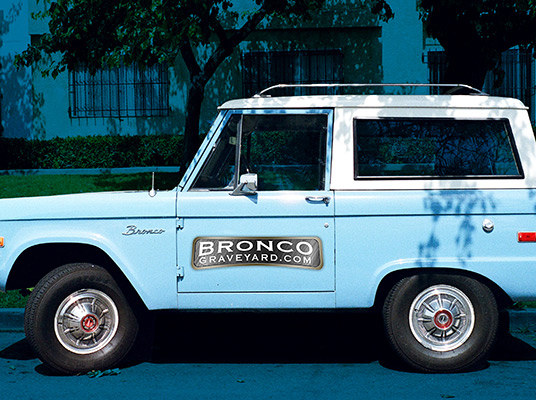 Minalex custom miniature extrusions can be manufactured in virtually any profile and configuration. You will find them in SpaceX rockets hundreds of miles above earth’s atmosphere and in Nuclear Submarines thousands of feet below the sea. Here on land, some of the most interesting are the ones we create for Jeff’s Bronco Graveyard, a.k.a. “The Graveyard.” Started in 1985, The Graveyard is the world’s largest seller of Ford Bronco parts. It ships anywhere around the globe and counts Minalex as a long-time, valued “part”ner.

Operating from their bricks-and-mortar location in Brighton, Michigan, The Graveyard’s online store at broncograveyard.com serves the “cult” of thousands of Bronco owners. The overwhelming love of the Bronco’s automotive lineage is still evident today in the incredible demand of its re-boot as part of Ford’s 2021 lineup. Serving these ever-growing legions of customers requires Jeff to build relationships with supply-chain partners who can deliver the highest quality products on-spec and on schedule.

“On-spec” was something we found to be just a bit challenging when we started working with The Graveyard more than twenty-five years ago. The first request for a Minalex part came in the form of a rough, hand-drawn pencil sketch on a piece of paper. It also contained some specs, the overall dimensions and not much more, but for us, that was all we needed to get started.

After serving client needs for more than fifty years, we weren’t concerned when we saw the sketch. Drawing (no pun intended) on this limited information, we produced a series of engineering production layouts and through a series of calls with Jeff we were ready to have the die created and start producing the part.”

The part we produce is a piece of headliner trim that has to withstand a lot of stress and twisting in off-road environments to keep a Bronco’s headliner firmly in place. It’s sixty-four-inches long, one-inch wide, in a solid “C” shape and receives a clear anodized finish. It fits Broncos manufactured between the years 1966 (the first production year) and 1977. The Graveyard orders quantities of 500+ every few months, which is a perfect fit again, no pun intended with our short-run, fast-turnaround capabilities.

One well-known owner of an original 1966 Bronco is none other than legendary rock icon, tv host and famous outdoorsman, Ted Nugent. In fact, Ted has three of them among his extensive collection of more than a dozen “rides.” In addition to his tricked-up, frame-off rebuild ’66, is a 1990 model powered by a Roush Yates V8 with an amazing 860 hp!

The “Motor City Madman” as Ted is called by his legions of fans, loves taking his Broncos to the most extreme places. He puts an incredible amount of wear and tear on them and that’s why he places a lot of trust in The Graveyard’s parts and equipment. After twenty-seven years, we’re proud that The Graveyard continues to put their trust in Minalex’s miniature aluminum extrusions.

If your needs call for a custom aluminum extrusion give us a call and let’s talk about how we can create the perfect part for you. It may not go into space or be used by a famous rock star, but we guarantee it will perform exactly the way you want it to.